1998 Advocacy Network-Leeds is established to meet the ambition of local advocacy providers in Leeds to establish an infrastructure organisation in the city which can devote itself to the support and promotion of advocacy.

2000 Advocacy Network-Leeds publishes locally developed ‘Leeds Standards for Good Practice in Advocacy’. These have been co-produced by Network members to ensure high-quality consistency is on offer throughout the city. Over the following year members of Advocacy Network-Leeds, along with NHS Trusts and Leeds City Council, all sign up to the standards.

2005 Nationally recognised quality standards for advocacy schemes (the Quality Performance Mark, currently) are produced by Action for Advocacy which are based on the Leeds Standards.

A key component of ensuring high-quality delivery of advocacy is the training that Advocacy Network-Leeds develops. The Effective Advocacy and Negotiation Skills course proves very popular and evolves over time to reflect the changes in the advocacy world. Advonet continues to regularly deliver this training.

2012 Leeds City Council changes how it commissions advocacy in Leeds. Previously, it commissioned separate specialist organisations to deliver advocacy, it now puts out to tender a single advocacy contract for the whole of Leeds: Advonet leads a consortium alongside 6 subcontractors (Cloverleaf, Leeds Advocacy, Advocacy for Mental Health & Dementia, Leeds Black Elders, Age UK Leeds, Advocacy Support) who are awarded the contract. Each subcontractor has a specialism, together they address the advocacy needs of every citizen in Leeds.

2013 As part of the new contract Advonet begins to deliver Health Complaints Advocacy, the first time it has delivered advocacy directly itself. It also sets up the Single point of Access for advocacy so that in future people need call only one number to obtain the advocacy they need.

2015 After two years as the core members of the Advonet consortium the Advocacy for Mental Health & Dementia, Advocacy Support and Leeds Advocacy decide to merge with Advonet, which they previously co-managed. of The three organisations take the view that this merger of choice will create the best vehicle for delivering person centred advocacy support to people facing disadvantage of all backgrounds and all needs. Leeds Black Elders, Age UK Leeds and Cloverleaf remain subcontractors within the consortium.

The diversity of Advonet’s client base was evident from the final stats. We found that, of those who disclosed it to us, 54% of people who were helped by Advonet are disabled. 40% of clients who dlsclosed to us had a mental health issue, with 20% saying they had a learning disability.

50% of our clients said they heard about Advonet through word of mouth.

The top issue people came to us with was medical issues, closely followed by finances and restrictions in freedom while in care.

2018/19 Advonet, in a consortium with Touchstone and Age UK Leeds, were awarded a contract to provide Care Act Advocacy, Community Advocacy, Health Complaints Advocacy, IMCA and IMA services in Leeds.

2019 CHANGE became part of the Advonet Group as a separate enterprise. 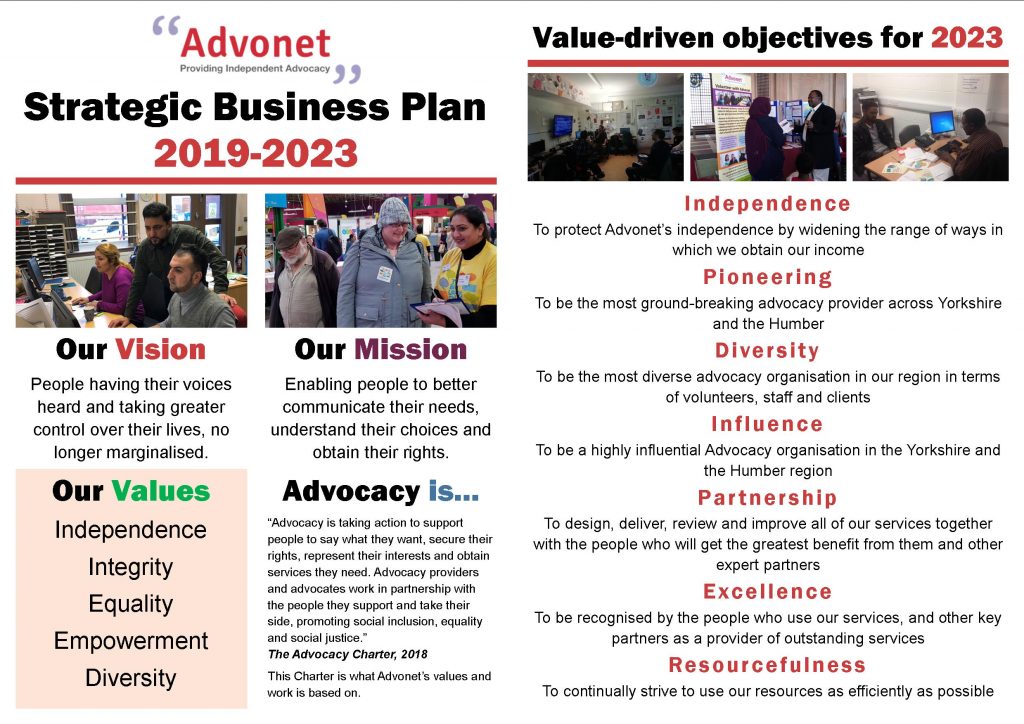 We were awarded the Advocacy QPM in July 2019.  The QPM is the UK’s only independent quality performance mark for organisations offering independent advocacy.

For more information about the Advocacy QPM, please visit http://www.qualityadvocacy.org.uk/